For a video game that was never officially released to the public I was quite surprised to hear that the Desert Bus Video Game has a big following online. WHY!? I hated that game even before I was told that I had to test it. But that following is for a good cause. Marathon playing of the game raises money for the charity Child’s Play.

A TRUE NIGHTMARE TO TEST

As I have mentioned elsewhere on this website, being a video game tester is not as glamorous or fun as most people 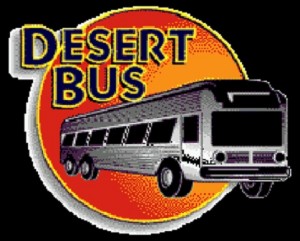 think. People who are not testers have NO IDEA how hard and frustrating the job can be at times. Testing Desert Bus was one of those times. In fact, Desert Bus was a pure nightmare to test.

Desert Bus was one of 5 mini game add-ons to the main game of Penn & Teller’s Smoke and Mirrors for the Sega CD, PC and 3DO. It was to be released on the Sega CD first and the PC and 3DO shortly after. However the company I was working for, Absolute Entertainment, Inc. went out of business shortly before the game was ever completed.

ARE YOU OUT OF YOUR MIND?

When the entire game was in the early design stages I thought, this game is going to be unique. Plus I liked Penn & Teller, I’ve seen them perform in Las Vegas before. It was cool to meet them in person and actually quite weird to hold a conversation with Teller because normally in their routines he never talks.

The designing stages of the game took a weird turn, which matched Penn & Teller’s weird sense of humor. I was QA 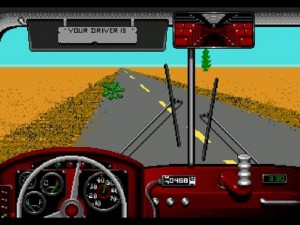 Manager at that time and I had about 7 testers working for me. When one of my bosses came up to me and told me about the Desert Bus portion of the game I said to him, ARE YOU OUT OF YOUR MIND!? Yes, I did yell that out loud.

Then I said in a regular tone of voice, how do you expect us to test this? I didn’t like the answer I got nor did I like the laughs and snickering people gave the testing department for taking on such a STUPID task to begin with. Testing just two test cases of that game would take 32 hours of continuous testing. 32 HOURS OF STRAIGHT TESTING! Just thinking about that game makes me EXTREMELY MAD!

WHY DESERT BUS WAS SUCH A NIGHTMARE

Okay, I’ve calmed down now and I’m ready to finish this blog. For those of you who do not know about Desert Bus and why it brings me and any sane person who has attempted to play it to such anger, here is why.

In Desert Bus you are the bus driver of a totally empty bus on a trip from Tucson, Arizona to Las Vegas, Nevada. The trip happens in real time but the fastest you can drive is 45 miles per hour. The entire trip will take 8 hours and you get only one point for making a complete trip. You can then do the same thing all over again by going from Las Vegas back to Tucson.

Yeah, I know what you are thinking, this sounds stupid already. But wait, it gets worse. You cannot pause the game and you have to constantly have your hands on the game controller. The bus always veers slightly to the right and if it should go off the road it will stall and you will be towed back to your starting city, also in real time.

Do you hate this game yet? It still gets worse. The road you are traveling is always completely straight with no real

scenery along the sides of the road. There is no other traffic on the road, no birds or clouds in the sky, nothing but a straight road. The only thing that will happen, if you haven’t given up on the game already, is that after a few hours of driving a bug splat will appear on the windshield.

The sky does change colors as the day turns to dusk and then night. You think driving Desert Bus during the day is boring? Try driving it at night where only your headlights will guide your way.

Because of this awful experience I no longer have the desire to watch anything having to do with Penn & Teller. You couldn’t pay me to go to any of their shows, unless it was a six figure amount. I wouldn’t purchase anything related to them ever again.

Though this is the worst nightmare I have ever had the displeasure to test, it is things like this that make testing video games harder than most people think. What do you think? Could you sit down and play Desert Bus for 8 hours straight without ever getting up to eat or relieve yourself? Me and my testing department had to take two hours each driving the bus just to make an entire 16 hour round trip. Then we had to do it again to test the towing back feature.

I read on Wikipedia that a bug was found after more than 24 hours of continuous play where the daytime scene never returns and just shows dusk, night and dawn. Oh well! The game was never officially released and I seriously doubt that Sega’s testing department would have found it either.

If you are a fan of Desert Bus or have any questions about the game, please leave a comment below and I will respond to it. Thanks for reading my blog post.